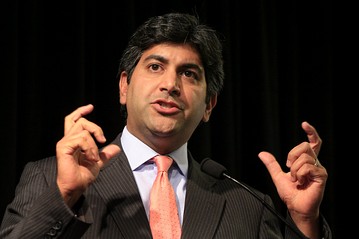 Some may be familiar with Aneesh Chopra for his role as the first ever Federal Technology Officer. Some may know him from his role at the state level, as Virginia’s Secretary of Technology. Others may recognize him for the recent launch of the Open Government Directive to make government more open and transparent with colleague, Vivek Kundra, Federal CIO.

Regardless, Chopra has been an instrumental role in 2009 and will continue to make big changes moving government more effective and efficient into 2010. His role as Federal CTO is grounded in promoting technological innovation to help the U.S. meet its goals. In his role as CTO, he is an assistant to President Obama, as well as Associate Director of the White House Office of Science and Technology Policy.

We recently had the opportunity to talk to Chopra about how networking helped him get where he is today in his career. We also learned from him what advice he would give someone who wants a job like his someday; we found out his advice to future government technology leaders. Watch this video to hear his words of advice:

Click here to hear Chopra on networking and his most influential mentor.