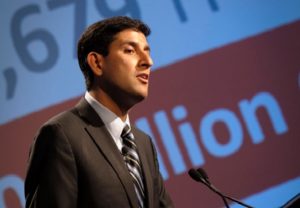 InformationWeek recently named Vivek Kundra, the Federal CIO, the Chief of the Year. Kundra has held this role for 9 months and has been a driving force in the U.S. government’s IT operations. His top priorities have been cybersecurity, cloud computing, engaging the public over the Internet, and IT project management. One of his more recent focuses has been the push towards government transparency. To receive this recognition from Information Week after less than a year is truly an accomplishment.

According to InformationWeek, Kundra has already “demonstrated a compelling vision for overhauling the government’s lumbering IT operations (with 71,000 federal IT workers and more than 10,000 IT systems), and his progress is so far impressive.” Some of his key accomplishments have been creating the IT dashboard, which shows the status of IT projects to the public, and helping launch dava.gov, which has more than 115,000 data sets today available (from a mere 47 data sets).