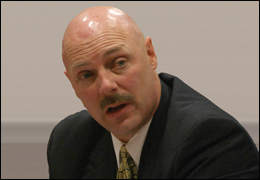 The FBI’s top cybersecurity official will now head the FBI’s DC field office, one of the most highly-profiled divisions of the FBI. The D.C. field office frequently examines members of Congress, foreign and domestic espionage, as well as international terrorism.

A spokeswoman for the FBI D.C. field office, Katherine Schweit, confirmed that assistant director Shawn Henry will leave his current role as FBI point man for cybercrime to become head of the FBI’s D.C. field office.

Through his post as head of cybercrime at the FBI, Henry has globally expanded FBI prosecution and investigation of cybercriminals since 2008.