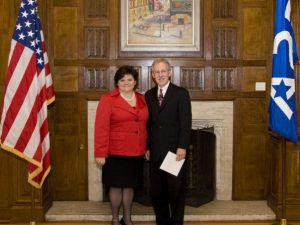 Yesterday, January 6th was the last day as GSA’s Chief of Staff for Danielle Germain. She has held the Chief of Staff position at GSA since June of 2009.

According to Washington Technology, Germain said, “We all know that [GSA has] been in a period of transition for the last two years and considering the length of time it is taking to get a permanent administrator, I have decided to take advantage of another opportunity.”

Germain stepped into the Chief of Staff position in June after Martha Johnson had her confirmation hearing for GSA Administrator. This was six months ago, and she has still not been confirmed.

Cathy Kronopolus will replace Germain. Kronopolus was the acting chief of staff before Germain. Additionally, there is another job transition at GSA. Susan Brita is expected to be the deputy GSA administrator due to the retirement of Barney Brasseux on January 3rd, 2010. It is still uncertain if Senate will confirm Martha Johnson.