Lawmakers Get Lessons on Social Networking 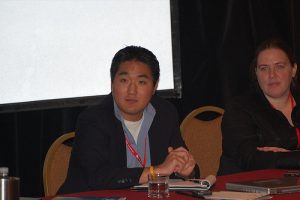 Adam Conner (pictured here), who is Facebook’s first D.C. staffer, hopes to demystify the social networking site for politicians on the Hill. He hopes to teach them how to use the site more effectively.

According to a Washington Post article, Republican Peter Roskam asked Conner, the Facebook lobbyist, “If we’re going to improve our presence on Facebook and really maximize it, what would you recommend as tangible steps?”

Conner went on to explain that since he is so comfortable on his Blackberry that he could try to do a status update at least once a day, or maybe upload a photo once a week. Moreover, he said that they would be surprised that what they do day in and day out, that may seem rather boring to themselves, may seem rather intriguing to constituents.

Adam Conner opened his Washington D.C. Facebook office out of his apartment by himself two years ago. Now the office has moved to Dupont Circle, and he has two others working with him. It is Conner’s goal to help build a stronger democracy by allowing politicians to be more comfortable with social networking.

However, one of the main challenges for Conner, in teaching politicians how to be more Facebook saavy, has been dealing with the ethics rules that are set out by the House Committee.