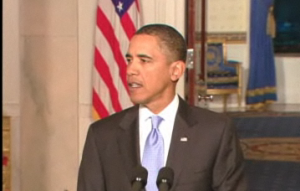 Last night in an address to the Nation, President Obama admitted the government had sufficient information to uncover the plot of the attack and then eventually disrupt the attack. Placing much of the blame on the intelligence community,Obama recognized their inability  “to connect the dots.” In addition to the wrong doings of the Intel community, Obama ensured Americans that Guantanamo Bay will be closing as scheduled.

The White House says that a full reported on the incident Christmas Day will be released this Thursday, outlining exactly where the faults lie.  Many inside the news media are speculating who the president will hold accountable and if any personnel changes will be made. Immediate media reaction after the press release is that someone will be removed from their position or fired within the Intel community.

Currently there are over 15 organizations that all have intelligence branches that report to the Director National Intelligence. Each agency is responsible for overlapping and distinctive information collection. With so many agencies effecting intelligence collection, the report of the 12/25 attack will fulfil some of the finger pointing the media has demanded.

The full report will outline which agencies are at fault and possible actions that can be changed or upgraded. Among many changes is the anticipation of changes to the fly list database system.