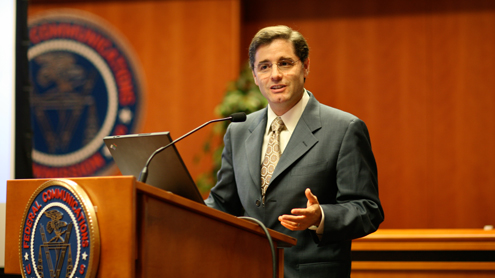 Julius Genachowski outlined his goal of providing 100 megabits per second (Mbps) broadband internet access to 100 million Americans by 2020 at a speech to regulatory commissioners earlier today.  He called the goal “ambitious but achievable.”

Chairman Genachowski termed the high-speed goal the “100 Squared” initiative at the NARUC Conference in Washington, DC today, and it is part of the National Broadband Plan due to Congress by March 17.

The chairman made explicit reference that “meaningful access” to broadband means access to high-speed connections, which means for the other 200 million citizens of the United States, speeds above 2 Mbps is the FCC’s goal.

Other goals of the National Broadband Plan include a 90% adoption rate of broadband internet (currently, it stands at about 65%) and “digital literacy” for every US high school graduate.  He also praised Google for  testing a one gigabit-per-second initiative, pioneering ultra-high-speed internet access.

Chairman Genachowski said that the US needs to take a global leadership role in creating opportunities on the internet. “We must lead the world in creating opportunity, and unrivaled opportunity means that every American must have access to broadband at a speed sufficient for meaningful use, no matter where they live or how much money they make.

He drew parallels between broadband deployment and the advent of electricity, moving past the highway system analogy that he described as insufficient to communicate the “transformative” aspect of the Internet: “it is high-speed Internet that is reshaping our economy and our lives more profoundly than any technology since electricity, and with at least as much potential for advancing prosperity and opportunity–creating jobs, and improving our lives.”

Chairman Genachowski made his goals clear: more spectrum, higher speeds, and more affordable broadband to all.