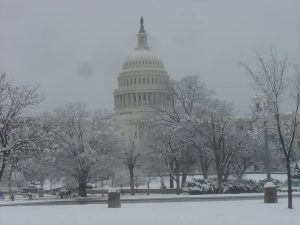 As the snow finally begins to melt, and the metro and buses begin to run at (almost) normal schedules, the federal government reopens.  Government personnel return to work today, Friday, February 12th for the first time since last Thursday.

Last night, at the usual announcement time of 6 pm, the Office of Personnel Management, informed government personnel that Friday the government would be open. However, employees were allowed to show up two hours late, and were also allowed the opportunity to take an unscheduled leave if they were unable to make it in the office.

The Blizzard of 2010 calls attention to the importance of teleworking for federal agencies. Only about one-third of the DC area federal personnel at GSA and OPM logged onto the network from a remote location during the past four days according to the Washington Post.

According to NextGov reports, Congressman Gerry Connolly thinks the issue of lack of teleworking is because there is a double standard. He said, “The rest of the workforce is given a free day, but if you’ve signed a telework agreement in some agencies, you’ve required to work from a remote location. Obviously unintentionally, it serves as a disincentive.”

This blizzard called the attention to telework and really put it to the test. Many would agree it failed and changes need to be made. On the contrary, some agencies have been using telework for years, and were not so much as phased by the storm, such as the Homeland Security Department of the U.S Patent and Trademark Office.

Teleworking or Telecommuting within the federal government raise important security and access questions. However, not all federal employees even have the capability to work from home. Perhaps in the aftermath of this storm, agencies will begin to change the standards of telework.