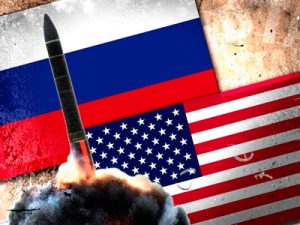 The first START treaty (Strategic Arms Reduction Treaty) between the U.S. and the USSR was signed on July 31, 1991. This treaty expired this past December and both sides agreed to observe the treaty until a new one was made.

A new treaty that expands and renews the old one has been proposed. Today Navy Admiral Mullen, the Chairman of the Joint Chiefs of Staff, said, “I stand solidly behind this new START treaty.”

Mullen also remarked, “The new START deals directly with some of the most lethal of those common challenges – our stockpiles of strategic nuclear weapons. By dramatically reducing these stockpiles, this treaty achieves a proper balance more in keeping with today’s security environment, reducing tensions even as it bolsters nonproliferation efforts.”

When Mullen met with his Russian counterpart, General Makarov, during the negotiation process they gained an understanding of each other’s challenges and opportunities. Going forward, Mullen and his staff will help shape the final treaty to foster the relationship between Russia and U.S. military.

Mullen is “as confident in its success as [he is] in its safeguards.” Moreover, “this treaty enhances our ability to do that which we have been charged to do: protect and defend the citizens of the United States.”