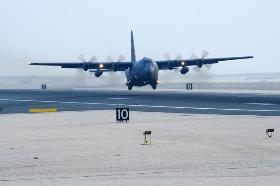 The U.S. Transportation Command (TRANSCOM) is responsible for ensuring that U.S. troops and cargo to duty stations around the globe. TRANSCOM will receive recognition from the DoD as one of the unsung heroes, according to Pentagon Press Secretary Geoff Morrell.

On April 1, Secretary of Defense Robert Gates is scheduled to Transportation Command headquarters at Scott Air Force Base, Ill. to present them with the Joint Meritorious Unit Award.

“Secretary Gates believes the members of Transcom are among the unsung heroes of our military efforts around the world, and this award allows him to personally thank this dedicated and unheralded team of professionals,” Morrell said.

Within the past 3 years, TRANSCOM has transported 5 million personnel, 8.5 million tons of cargo and 5 billion gallons of fuel.

“Without their tireless work, our missions in Iraq, Afghanistan, and indeed around the world, would eventually grind to a halt,” Morrell said.

One of Gates’ goals was to provide armored vehicles to service members more quickly and TRANSCOM has delivered 450 vehicles per month since 2007. Additionally, TRANSCOM played a central role in relief efforts to Haiti.

“In responding to the catastrophic earthquake in Haiti,” Morrell said. “Transcom has provided over 2 million meals, more than 5 million liters of water to the island, in ongoing humanitarian and disaster-relief operations.”