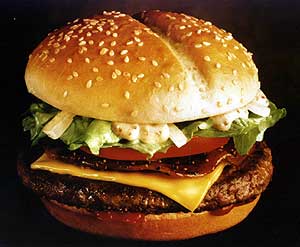 A group of retired military officers claim that school lunches have been a factor in making young Americans so fat that fewer of them meet the military’s physical fitness standards, thus jeopardizing recruitment.

According to a new report titled “Too Fat to Fight” released Tuesday, more than 9 million young adults are too overweight to join the military. Now, the officers’ group Mission: Readiness urges Congress to pass a wide-ranging nutrition bill that will make the cafeteria school lunches around the country healthier.

“We believe that the child obesity issue is so serious it has become a threat to our national security,” said Lt. Gen. Seip. “Mission: Readiness supports efforts by Sen. Richard Lugar and Agriculture Secretary Vilsack to get new legislation on the books that would help reduce child obesity.”

Mission: Readiness appeared Tuesday on Capitol Hill, where it brought up concerns about how other issues in addition to obesity, such as criminal backgrounds or the lack of high school diploma, prevent young adults from joining the armed services. However, the leading medical reason why recruits are rejected is because of weight problems, the group said.

“While we are meeting our recruitment targets today, those of us who have served in command roles are worried about the trends we see,” said retired U.S. Navy Rear Adm. James A. Barnett. “Our national security in the year 2030 is absolutely dependent on reversing the alarming rates of child obesity. When over a quarter of young adults are too fat to fight, we need to take notice. We urge Congress to take action on child nutrition this year.”

Currently awaiting a Senate vote, the school lunch bill would get rid of junk-food from all schools; support an increase of $1 billion per year for 10 years for child nutrition programs; and develop new school-based strategies helping parents and children adopt healthier eating and exercise habits.

In the May issue of the Atlantic, Thomas R. Frieden, the director of the Centers for Disease Control and Prevention, spoke about how obesity is a social illness brought on by peer pressure and advertising. However, it does not free people from their responsibility to make better choices for themselves.

“This does not absolve individuals of the responsibility of trying to get more exercise and eat healthier,” Frieden said in the article. “But it suggests a synergy between policy intervention and personal efforts to lose weight.”