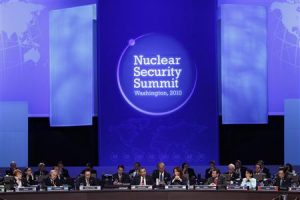 Obama said, “Just the smallest amount of plutonium, about the size of an apple, could kill and injure hundreds of thousands of innocent people.” And this is why leaders from 47 different nations are gathering to address this problem. President Obama claimed these nuclear materials, and the fact that they can get into the hands of terrorists, are the greatest threat to the world today.

Obama stressed the need for the world to take action and said, “This is one part of a broader comprehensive agenda that the United States is pursing, including reducing our nuclear arsenal and stopping the spread of nuclear weapons – an agenda that will bring us close to our ultimate goal of a world without nuclear weapons.”

Yesterday’s conference included discussions on ways to secure nuclear material, ways to build up the International Atomic Energy Agency, and how to foster relationships between nations to prevent nuclear materials from getting into the hands of terror groups.

President Obama said, “For the sake of our common security, for the sake of survival, we cannot drift. We need a new manner of thinking and action. This is the challenge before us.”