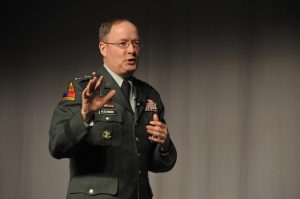 Army Lt. Gen. Keith B. Alexander, the director of the National Security Agency, is receiving praise from defense officials for his recent promotion. Senate confirmed Alexander on May 7, 2010 to lead the new U.S. Cyber Command.

Pentagon spokesman Bryan Whitman said: “We are pleased that the Senate has moved forward with his confirmation. General Alexander brings to the job the leadership to stand up this command, and the skills and expertise that will be critical to the new command in dealing with security challenges in the cyber domain.”

Defense Secretary Robert Gates created the U.S. Cyber Command last June in response to several threats against the department’s computer networks. During his confirmation hearing in April, Alexander told Senate that his main focus would be to educate the public and build capacity to secure the department’s networks.

Alexander said, “This command is not about an effort to militarize cyberspace. Rather, it’s about safeguarding out military assets.”