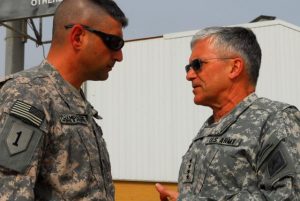 The Army is continuing the most fundamental series of changes it has seen since World War II, Gen. George W. Casey Jr. told  the Defense Writers Group yesterday.

“We are moving to put the whole Army on a rotational model, much like the Navy and Marine Corps have been on for years,” Casey said. “We have to do that, because I have to continue to generate trained and ready forces for employment around the world for the next decade or so.”

The service will complete the “modularization” of the forces with the funds from the 2011 budget. Army officials also will continue to tinker with the shape of the force and the training that soldiers receive, the general said.

Casey said he is optimistic about the security situation in Iraq. He said U.S. forces there are doing well in setting up the “advise and assist” brigades that will take over from U.S. combat units in September. All U.S. forces will be out of Iraq by the end of 2011.

Casey also discussed the need for better dialogue within the Army about risk.

“The superior commanders have to create an environment where their subordinates are comfortable coming back to them to say, ‘I can’t do what you’ve asked me to do on the timelines you want with the resources you’ve given me,'” he said.

Some 94,000 American servicemembers are in Iraq, and 87,000 are in Afghanistan. Casey said roughly 90 percent of the soldiers in the Army have deployed, are in units with orders to deploy, or are in basic training and advanced individual training.

“Everybody is moving toward the fight,” Casey said.

Responding to the question whether the Army is ready to implement changes if Congress repeals the law that bars openly gay soldiers from serving, Casey said he needs to wait for the results of a study Department of Defense Secretary Robert M. Gates commissioned to investigate that question.

“We don’t know what we need to do yet,” Casey said. “This will take shape between now and the first of December.”