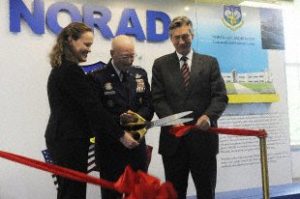 The Department of Defense last week unveiled a hallway in the Pentagon dedicated to the foundation of the U.S.-Canadian defense relationship: the North American Aerospace Defense Command.

For more than half a century, this bilateral command has been responsible for keeping the airspace over the two countries and the waters surrounding them safe from enemies ranging from the Cold War Soviet threat to present-day terrorists.

The exhibit depicts the command’s missions in the air and space domains that began in 1957, and the recent additions of the maritime and missile warning systems that enhance the command’s capability to protect North America.

Speaking at a hallway in the Pentagon, Gen. Gene Renuart stressed the importance of having a solid NORAD defense.

“The ongoing adaptation of NORAD’s mission and capabilities to meet the challenges posed by ever-changing threats testifies to the strength of the NORAD agreement and the solid relationship between Canada and the U.S.,” he said. “The strength of the NORAD relationship has enabled it to serve as an extremely flexible framework, one that adapts to an evolving security environment.”

Canadian Ambassador to the United States Gary Doer, who joined defense officials in the ribbon-cutting ceremony, said the exhibit is emblematic of the strong partnership between the two nations and it also serves as a reminder of the dedicated personnel at NORAD.

Under Secretary of Defense for Policy Michele Flournoy said the corridor, which is located at the “A” ring on the Pentagon’s third floor between corridors 10 and 1, should be a reminder to everyone to occasionally slow down.

“All of us who work in the Pentagon, including myself, get caught up in the work we do day to day, and we run from meeting to meeting, and we often speed through these hallways like we’re running a race,” she said.

Maj. Gen. John Morrison, former chief of staff at U.S. Cyber Command (USCYBERCOM), has received a nomination for Army deputy chief of staff G-6, a high-level role focused on information technology. His nomination comes as the Army restructures its chief information office and splits the old CIO/G-6 role into two.