Leaders of All Levels, Areas Must Understand the Cyber Threat, Says Mullen 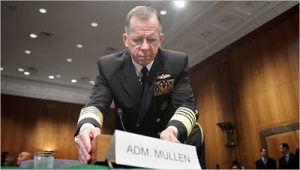 As cyberspace will change how the United States fights in the next 20 years, leaders at all levels need to understand the threats and help the military deal with them, Navy Adm. Mike Mullen told graduates at the U.S. Air Force Academy in Colorado Springs, Colo.

The chairman of the Joint Chiefs of Staff called cyberspace “a global common in which we do not enjoy unmatched advantage, where international norms are the easiest to flout without consequence, and upon which our entire way of life depends,” and urged the new officers to have an open mind to new ideas within the cyber realm and to help shape and lead the military.

Mullen echoed this sentiment later to about 500 service members at a town-hall session at nearby Peterson Air Force Base, telling them he expects that warfighting requirements in space and cyberspace “will grow exponentially” in the next years.

“We will have great opportunities and great challenges in those two areas, particularly those areas where we are not dominant [and] we don’t have the advantage,” he said.

Speaking to reporters after the session, Mullen said leaders at all levels need to understand the issues and the threat, being trained and prepared in it.

“So that’s what I am encouraging them to do with that,” he said. “Don’t just turn it over to the chief or turn it over to the sergeant major. We can’t do it. It’s too lethal and too potent, and there are adversaries in the cyber world that we don’t understand yet.”

Speaking about the lack of boundaries, rules and authorities regarding cyberspace, Mullen said he predicts a day when the international community agrees to a common set of standards about its use.

Mullen said he already has experienced some crises related to computer hacking, and lauds investments already made and continuing efforts to prevent these threats.

“It’s pretty scary stuff,” he said of the cyber threat. “And it needs to continue to be addressed very, very rapidly.”