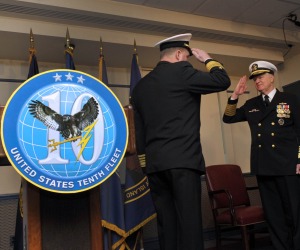 Deputy Defense Secretary William J. Lynn III addressed the importance of the new military establishment of the U.S. Cyber Command at a ceremony to honor the command’s top officer, Army Gen. Keith Alexander on May 21, at Fort Meade, Md.

During the ceremony, Lynn explained the command is an example of the latest steps employed by the U.S. military to better protect its networks.  Cyber Command will place all existing cyberspace operations under one infrastructure and is important to the success of the Department of Defense’s technological advantages.

“We want to be able to maintain those advantages and protect the military missions, and that is the main mission of Cyber Command – it is to protect the military networks,” Lynn said. “It will have a role, though, in protecting the government’s networks and critical infrastructure.”

The deputy defense secretary explained the command has made substantial progress in its cyber capabilities.

“I think we’ve worked through a lot of that,” Lynn said. “We’ve been able to work with the industry and share information about the threats and show them what we think is coming at them. I think we will be able to build further on that.”

It is Lynn’s hope the command of a four-star general will allow Cyber Command to be dealt with on an equal basis throughout the Department of Homeland Security. The command’s full capability is scheduled for Oct. 1, 2010.