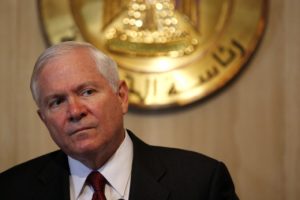 Secretary of Defense Robert Gates recently spoke about how the Pentagon is spending its money. Gates spoke at the commemoration of the 65th anniversary of VE Day at the Eisenhower Library in Abilene, Kansas on Saturday, May 8, 2010.

Secretary Gates used the tough budget decisions during the Cold War made by President Eisenhower as an example of his look at how the department is spending its money in our present day economy.

Gates spoke about being honored and humbled being at the Eisenhower Library and Museum on the special occasion, as well as his home state of Kansas. Dwight D. Eisenhower has been a source of inspiration for Gates and his picture sits behind his desk in Washington D.C. George C. Marshall’s portrait sits right next to General Eisenhower.

Gates closed his speech with a quote from his predecessor, Secretary Rumsfeld on September 10th, 2001, when he said, “A person employed in a redundant task is who could be countering terrorism or nuclear proliferation. Every dollar squandered on waste is one denied to the war fighter.”