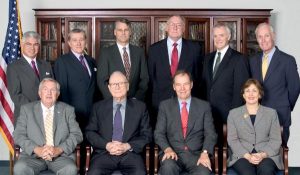 Lee Hamilton and Thomas Kean, both members of the 9/11 Commission, appeared before the House Committee on Homeland Security to discuss the nature of the terrorist threat to the United States.

“The conventional wisdom for years has been that al Qaeda’s preferred method was a spectacular attack like 9/11. But the defining characteristic of today’s threat seems to be its diversity,” they said in a prepared statement.

To highlight the growing diversity of the threat, Hamilton and Kean discussed the recent attempted terror attacks against the United States, including the attempted bombing of Times Square and the “underwear bomber” attempt on a flight to Detroit late last year.

“In both of these cases, al Qaeda affiliates thought previously as regional or local threats demonstrated their ability to reach the United States. We’re well aware of the threat emanating from the tribal regions of Pakistan,” they said. “We’ve also come to appreciate the increasing threat of homegrown terrorism as some Americans have become radicalized.”

As the threat landscape changes, Kean and Hamilton advocate for a new approach to the problem, with new policy recommendations. Also, recent events have only accentuated the need to continue with intelligence reform, according to Hamilton and Kean.

“There has been good work done since September 11, 2001, but we need to continue down the path toward further integration and insist on a greater level of effectiveness within the intelligence community,” they said.

That reform also needs to alter the Intelligence Community’s methods of handling intelligence, according to Kean and Hamilton.

“The Intelligence Community must become more competent in obtaining and using appropriate information on people who cross borders and may have nefarious intent, including Americans,” they said.

Read the full text of the testimony here