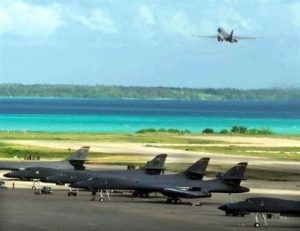 The U.S. Navy is concerned about how climate change with rising sea levels could impact national security and military operations in the future, according to a senior Navy official.

“We want to basically pace the threat,” said Navy Rear Adm. David W. Titley, who serves as director of the Navy’s Task Force Climate Change. “We don’t want to get into a tail chase over climate change, but at the same time, … we do not want to spend ahead of need, spending for things that may not be required for years or decades later.”

Titley said one of the investments the Navy will consider is how sea-level rises will affect its infrastructure. As an example, he mentioned Diego Garcia, an island in the Indian Ocean mostly populated by the U.S. military. Studies have shown that over the course of the 2oth century, sea levels have risen roughly eight inches, he said.

As the oceans get warmer, they expand and cause the sea level to rise, Titley explained. In addition, the land-based ice that already is melting adds volume to the ocean. He acknowledged considerable uncertainty over the time line and extent of sea-level rise, but noted that leading climate scientists believe sea levels could rise as much as six feet by the end of the century.

When asked whether naval bases were prepared for stronger and more intense hurricanes, Titley said the impact a warming climate may have on tropical storm development is controversial and subject to much research. Ocean warming is only one component of hurricane formation, and other factors such as upper-level wind shear, may not support increased frequency and intensity, he said.

“What I can tell you,” Titley said, “is that our regional commanders make sure their bases are prepared for severe hurricanes every year.”

Titley said the Task Force Climate Change will ensure the Navy is not taken by strategic surprise, and he expressed satisfaction that climate change is being considered in strategic war games and limited objective experiments.

“Nobody knows what the future will entail,” Titley said, “but if you run a range of scenarios, and you see that there are common capabilities and capacities that you would need to answer those scenarios, then you can really inform a future budget debate.”