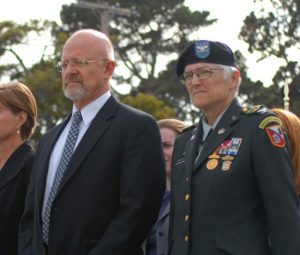 President Barack Obama’s nominee for the next director of national intelligence, James R. Clapper, is the right man for the job, according to Department of Defense Secretary Robert M. Gates.

In a news conference en route to Azerbaijan from Singapore, Gates said Clapper, a retired Air Force lieutenant general who currently serves as director of military intelligence and as undersecretary of defense for intelligence, would bring vast experience and the right approach to the position.

“I think the president could not have found a better person, a more experienced person, or [a person] with a better temperament to do this job and actually make it work than Jim Clapper,” Gates said.

After saying how he has heard different opinions of what type of person would be most effective as director of national intelligence, the defense secretary offered his own.

“What is really key, in my view, in making that DNI office work is the chemistry between the DNI and the other leaders of the intelligence community,” he said. “I know that some are looking for a strong executive – a big boss that tells everybody what to do. But structurally, that’s almost impossible with this job, because virtually none of the heads of the 16 intelligence agencies actually work for the DNI.”

Gates who known Clapper for more than 20 years, described him as “very independent-minded” and as a consummate professional who has the respect of virtually everyone in the Intelligence Community.

“He is the first person – and, actually, the only person – that I hired and brought with me when I became secretary of defense,” Gates said.

The secretary also acknowledged he “kind of winced with pain” when Obama first asked him about Clapper’s possible nomination for the DNI position.

“The idea of losing Jim at the Defense Department is a real loss for us,” Gates said.