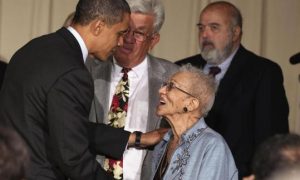 President Barack Obama held a televised town hall meeting to clear up some remaining confusion about what the new healthcare reform means to the United States’ elderly citizens.

“What you’ll see through this new law are new benefits, new cost savings and an increased focus on quality to ensure that you get the care that you need,” Obama told the still skeptical seniors.

The president announced Thursday marks the date in which a $250 check to cover the costs of prescriptions will be mailed to elderly citizens who fall into Medicare’s drug coverage gap, also known as the “doughnut hole.” It is the administration’s hope the check will show proof of the changes that have occurred with the new reform.

Obama also announced a new initiative to cut in half the amount of waste, fraud and abuse in the Medicare program by the end of 2012. He reassured all mishandlings in the system will be detected and gave a warning to the people “who swindle and steal from seniors or the Medicare system: We are going find you, we will prosecute you, and will ultimately prevent those crimes from happening.”

The administration is holding these national town meetings to clarify the advantages of the new healthcare system and demonstrate the immediate changes that benefit senior citizens. The first checks that will be sent to those in the “doughnut hole” will reach about 80,000 people.