US Defense Secretary Robert M. Gates: ‘The United States cannot have a strong military without a strong economy’ 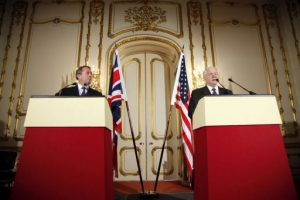 Gates explained in a press conference he will examine how the department is allocating expenses and hopes reductions will take place in other areas, like business practices, as opposed to force structures and operations.

“I said a while ago that the United States cannot have a strong military without a strong economy,” he said. “That’s true of every country. … One way we’re trying to deal with what we expect to be extremely limited growth in the American defense budget going forward is take a very hard look at how we spend our money, and to make sure that we’re spending it on those things that give us actual military capabilities, both now and in the future.”

Both Gates and Fox touched upon their national security reviews and anticipated security requirements. Fox explained  since he took over the British department in May, he has been struggling with an economic “train wreck” that is making the upkeep of a strong military force difficult.

“People don’t quite understand the size of the public debt in the [United Kingdom],” Fox said, “but it’s probably about the equivalent of borrowing some 1.2 million pounds every single day since the birth of Christ. … So it’s not going to be an easy financial backdrop against which to make decisions in a very difficult global security environment.”

Gates hopes military funding in the down economy will not affect national security and capabilities. The efforts that are underway, as Gates explained, are directed at making the right investments for the future.