Home / News / Biden: ‘I’m absolutely confident we are moving in the right direction’

Biden: ‘I’m absolutely confident we are moving in the right direction’ 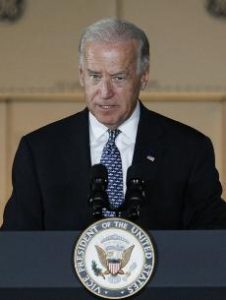 In his address, Biden assured the stimulus bill is leading the nation down the right path.

His comments follow a recent letter sent by the Chamber of Commerce to President Barack Obama saying that the Recovery Act has not created enough jobs.

However, according to Biden, the stimulus push has saved or created about three million jobs and plans to save about 500,000 more by the end of the year. He explained the Recovery Act has played a large role in changing the direction of the nation’s economy by slowly raising the level of GDP in the second quarter and employment numbers, despite the Obama spending programs.

Romer added the money spent under the Recovery Act for renewable energy is generating private investment money, about $3 for every $1 spent from the stimulus bill.

Biden touched on this and discussed the importance of the stimulus bill’s spending to leverage private investment.

“The Recovery Act is not going to do it alone,” he said. “It’s private industry. It created a virtuous cycle of investment at a time when no one was willing to take a chance. Presidents can’t dictate economic outcomes, but they can set goals.”

According to the report, it is expected real GDP growth will remain steady in the second half of 2010 and throughout 2011.

CEA Chairwoman Christina Romer is scheduled to testify on behalf of the report’s results in Congress later today.