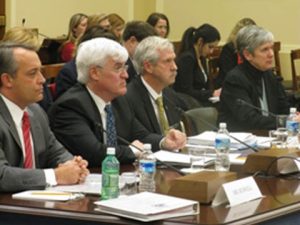 The Committee on Science and Technology’s Subcommittee on Technology and Innovation held a hearing yesterday to discuss cyber attack attribution technology and its importance in reducing the impact of network attacks and intrusions.

During the hearing, the committee looked into future research and development necessities and began to decide who will be responsible for overseeing the plan.

“We are well aware of the critical role that IT networks play in managing much of our day-to-day activity—from online banking to systems that make sure there is food on grocery store shelves,” said Subcommittee Chairman David Wu. “Our growing reliance on networks has made us more vulnerable to cyber attacks and has increased the potential for such attacks to have far-reaching and crippling effects. Now more than ever, we need to focus on the development of tools and technologies to prevent, detect, and respond to cyber attacks.”

Attribution technologies are important in determining the source of Internet and network threats. This is vital to ensure privacy and penalize attackers.

However, while these cybersecurity tools would enhance safety on the Internet, concerns over the freedom of anonymity remain a strong force against the implementation of attribution software.

“However, given that the internet is intended to be open and anonymous, the attribution of cyber attacks can be very difficult to achieve and should not be taken lightly,” Wu said. “As co-chair of the Global Internet Freedom Caucus here in the House, I am very concerned about the potential implications to privacy and internet freedom posed by attribution technologies.”.

But, the government has a responsibility to protect its citizens’ infrastructure. The committee attempted to determine how coordination between government and industry on the development of new attribution technologies could strengthen their protection of individual privacy.

As the U.S. economy becomes increasingly dependent on the Internet, the need for protection against infrastructure attacks becomes more and more important.