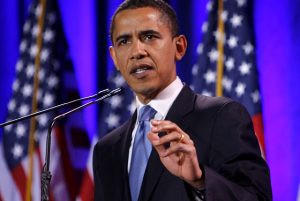 President Barack Obama yesterday for the first time commented on the WikiLeaks’ release of Afghanistan war documents, saying although he is concerned about the leaks, they do not reveal anything new.

“While I’m concerned about the disclosure of sensitive information from the battlefield that could potentially jeopardize individuals or operations, the fact is that these documents don’t reveal any issues that haven’t already informed our public debate on Afghanistan,” he said. “Indeed, they point to the same challenges that led me to conduct an extensive review last fall.”

The president made the comments from the White House Rose Garden after meeting with members of the House and Senate on a variety of issues, including Afghanistan war funding, job creation and energy policy.

Obama said the 2004-2009 period covered in the reports show shortcomings in U.S. policy in Afghanistan that led to his review last fall and his decision to increase American troop strength there by 30,000.

“For seven years, we failed to implement a strategy adequate to the challenge in this region,” Obama said. “That’s why we substantially increased our commitment there, and insisted on the cooperation of Afghanistan and Pakistan.”