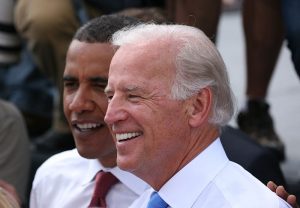 Tomorrow, after more than seven years of war, President Barack Obama will end the U.S. combat mission in Iraq.

In his Weekly Address, Obama talked about the end of the war in Iraq and what his administration is doing to support U.S. veterans once they get home.

Vice President Joe Biden issued a statement in which he spoke about how after taking office, more than 90,000 troops have returned from Iraq, leaving a force of up to 50,000 U.S. troops who will support Iraqi Security Forces. By the end of next year, all American troops will be out of Iraq, he said.

“These men and women have put their lives on the line,” Biden said. “They have spent months or years away from their families and homes. Many have suffered devastating injuries. And some who left for Iraq will never return home.”

Including veterans of the wars in Iraq and Afghanistan, there are nearly one million more veterans in the United States than there were 10 years ago, Biden said, adding that Obama is “100 percent committed” to supporting the troops and their families not only when they are fighting abroad, but also when they come return home.

The vice president highlighted some of the investments in veterans’ care and support, including modernizing and expanding hospitals and devoting more resources to job placement and training.