Transportation Agencies Gearing Up for iPads 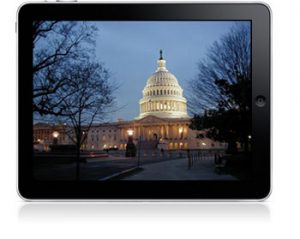 The Transportation Department seems willing to embrace Apple’s iPad for department-wide usage. Now the only question that remains is when.

Government Attic reports the FAA has tested out 800 iPads and that other heads of transportation agencies seem to agree that integrating the iPad would be a beneficial move.

Bill Mosley, department spokesman, said that the department is still evaluating the results of the pilot, “but early results indicate a value for training and for employees who do not need full computing capability, such as a laptop.” The BlackBerry playbook was also tested but was limited in useful applications.

Mosley also indicated that the department is still evaluating certain security measures that would be necessary for usage within the government. The National Institute of Standards and Technology has yet to certify the iPad’s operating system for encryption criteria.