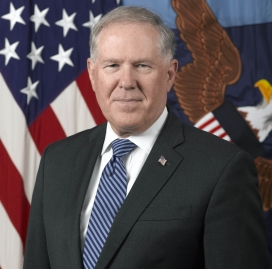 Frank Kendall serves as defense under secretary for acquisition, technology and logistics, having been confirmed for this post in May 2012.

Prior to this appointment, he served as principal deputy under secretary between March 2010 and May 2012 and also as acting undersecretary before his confirmation.

According to the Pentagon, Kendall is a four-decade veteran of engineering, management, defense acquisition and national security affairs in private industry, government and the military.

Within the private sector, he served as vice president of engineering for Raytheon and oversaw internal research and development there. He has also served as a managing partner at Renaissance Strategic Advisors, a Virginia-based aerospace and defense sector consulting firm.

His government career includes service as director of tactical warfare programs in the Office of the Secretary of Defense and as assistant deputy under secretary for strategic defense systems.

His 10-year Army career includes active duty service in Germany, a teaching position in engineering at the U.S. Military Academy and research and development positions.

He is a recipient of military awards including the Meritorious Service Medal with oak leaf cluster, Army Commendation Medal and the National Defense Service Medal.

He graduated from the U.S. Military Academy and holds a master’s degree in aerospace engineering from the California Institute of Technology, an M.B.A. from the C.W. Post Center of Long Island University and a juris doctorate from the Georgetown University Law Center.

Coverage of Kendall on ExecutiveGov