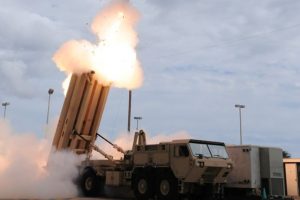 The Pentagon is deploying the Terminal High Altitude Area Defense System (THAAD) to Guam in order to safeguard against a possible North Korean nuclear attack.

The ballistic missile defense system being sent to the region is in addition to the bombers, stealth fighters and ships which have already been deployed, according to the New York Post.

In the past week, North Korea has ended all communications with its southern neighbor and given its military the go-ahead to use nukes against the U.S.

Though few experts believe the isolationist state has the capability to reach the U.S. mainland with its weapons, officials are not taking the threats lightly.

Secretary of Defense Chuck Hagel called the North’s development of nuclear weapons a “growing threat” and Secretary of State John Kerry said Korea’s productions of weapons materials is  “unacceptable” and stressed that the US is ready to defend itself and its allies.

“I think the end state North Korea would like is that we, the US in particular, but also China, Japan, South Korea, are so rattled by all this that we decide it’s just better to cut a deal with them,” said Michael Green, an Asia specialist at the Center for Strategic and International Studies.

Currently, the U.S. has 28,500 troops stationed in South Korea to help bolster the country’s defenses.

Bryon Doyle, head of the infrastructure directorate at the Defense Information Systems Agency (DISA), has said the agency is reaching out to its customers and vendors to help inform its efforts to deploy next-generation network technologies. DISA is planning to deploy software-defined wide area networking (SD-WAN) capabilities across the Department of Defense (DoD) enterprise.