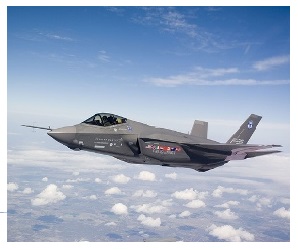 The F-35 joint strike fighter had its first flight in 2006, and in the ensuing seven years, the Defense Department has worked with a number of government contracting firms to meet delivery obligations to the service branches and international customers.

The task of building the next generation fighter has been one fraught with difficulty but has begun to turn around as GovCon and the federal government have stepped up their efforts.

Already the most expensive weapons program in military history, the F-35 continues to garner a large sum of the DoD’s money in upcoming budgets.

(Click Here, to read a synopsis of GovCon Wire’s coverage of the F-35 and Here for ExecutiveBiz.)

That large allocation of DoD funds is big, but the Lexington Institute actually says the cost of purchasing F-35’s will go down.

According to an ExecutiveGov article, DoD will spend $327 billion on the fighter through 2032 including $64 billion on engines. That is a 1.5 percent decrease from what the DoD said it would spend on 2,457 aircraft in a recent selected acquisition report.

In another piece of positive F-35 news reported on ExecutiveGov, the U.S. Air Force said they could start operating the F-35 in 2016, one year ahead of schedule. Each jet to come off the production line is being tested at a Lockheed Martin Fort Worth,Tx. facility.

Internationally the F-35 has struck deals with a number of foreign partners, including the Japanese who intend to buy 42 of the next generation aircraft.

In a recent ExecutiveGov article, Japan’s top uniformed defense official said the F-35 is the country’s best choice in aircraft as it handles tensions with China and North Korea.

Keep checking this website for more updates on the joint strike fighter.