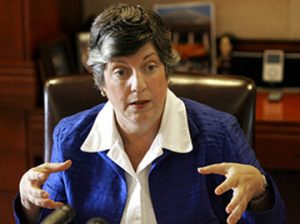 Homeland Security Secretary Janet Napolitano will step down as head of DHS to become the next president of the 10-campus University of California system, the Los Angeles Times newspaper reported Friday.

Larry Gordon writes the UC Board of Regents will decide on Napolitano’s nomination during a board meeting Thursday in San Francisco.

Napolitano, if approved, would be the first female and first national-level political figure to head UC in the system’s history, according to the report.

“While some may consider her to be an unconventional choice, Secretary Napolitano is without a doubt the right person at the right time to lead this incredible university,”  Sherry Lansing, the regent who headed the search committee, said in a statement.

Napolitano,was confirmed as the nation’s third homeland security secretary and the first woman to hold the post the day after President Barack Obama took office in 2009.

Prior to her role in the Obama Administration, Napolitano served as governor and attorney general in Arizona.