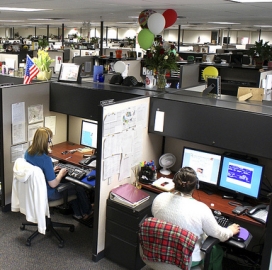 The General Services Administration‘s nearly 3,300 headquarters-based employees will have to reserve desk space at the agency’s renovated campus in a similar matter to hotel rooms, the Washington Post reported Monday.

Lisa Rein writes the agency spent a year to educate workers on how to electronically reserve desks and meeting rooms prior to visiting headquarters, after which they must clean up their spaces without a hint of clutter.

GSA reduced the amount of space for each worker by more than half after shedding rented office space in Washington and Northern Virginia, Rein reports.

Tangherlini himself is not exempt from the office space reductions, as he now sits in an open area instead of an executive suite that many other public sector leaders have.

The agency is responsible for 375 million square feet of federal office space, according to the Post.