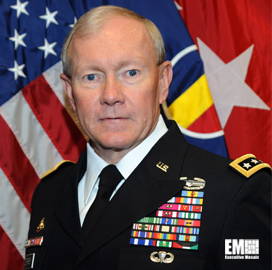 Army Gen. Martin E. Dempsey, chairman of the Joint Chiefs of Staff, has spoken about bolstering defense ties between the U.S. and Egypt in a July 3 interview with CNN reporter Candy Crowley, the American Forces Press Service reported Friday.

Jim Garamone writes Demsey disclosed that the U.S. Army intends to help the Egyptian forces transition to a new political structure in the wake of conflicts that erupted in the country late last month.

The article says the general wanted to reiterate that Egyptian leaders need to handle the situation with the welfare of their people in mind.

Garamone reports American officials have confirmed that senior military officials from the two nations have held meetings with a goal to address the issue.

“The armed forces ran the country (Egypt) for several decades, and they were transitioning themselves into their role in a democracy,” Dempsey was quoted as telling Crowley.

The CNN interview took place a day before the leader of the Arab nation was ousted by the military, according to AFPS.