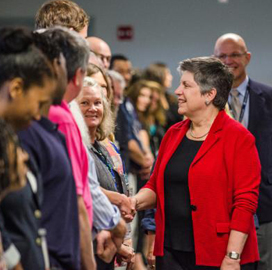 Phil Mattingly writes Napolitano, who stepped down from the homeland security secretary post after four years, warned future cyber attacks could disrupt the country’s economy in the future.

“Our country will, at some point, face a major cyber-event that will have a serious effect on our lives, our economy, and the everyday functioning of our society,” Napolitano said.

Napolitano also said the next homeland security secretary should focus on emerging threats and border security issues, according to Bloomberg.

Obama has not appointed her successor yet, Mattingly reports.