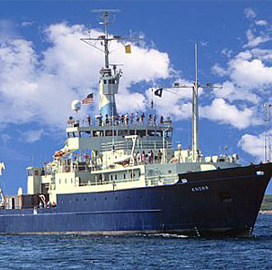 Some scientists believe air-sea fluxes could alter the path of radio waves and make it difficult for vessels to remain undetected and communicate or track enemies, Keller reports.

“We need to understand where we are in relation to this ducting environment and understand the energy we’re emitting and the energy an adversary is emitting,” said Dan Eleuterio, program officer for the Office of Naval Research’s ocean battlespace sensing department, according to the report.

“If we don’t know these things, it’s like rolling the dice. If we do know them, it can give us a tactical advantage,” Euleterio added.

Keller reports ScanEagle carries a sensor that works to measure humidity, temperature, momentum and energy and relay the collected information to personnel aboard an amphibious assault ship or destroyer.