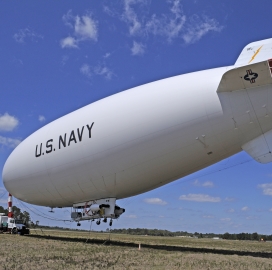 The Naval Research Laboratory and the Navy’s Scientific Development Squadron ONE are flying an airship over the Washington metropolitan area to map Maryland and Virgini9a.

The MZ-3A launched Saturday for a two-week mission to survey areas in locations within the Washington D.C. Flight Restriction Zone, the Navy said Sept. 20.

Integrated Systems Solutions is the contractor for the mission and the Navy approved ISSI’s commercial blimp pilots to fly the government-owned and contractor-operated blimp.

American Blimp Corp. built the MZ-3A under authorization from the Federal Aviation Administration and the Transportation Security Administration.

The FAA will provide air traffic control and radio communications for the airship and pilots, which is scheduled to land Oct. 5 at the Naval Air Warfare Center’s aircraft division in Lakehurst, N.J.