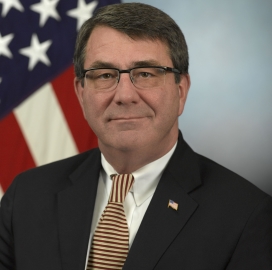 Ash Carter, deputy defense secretary, will step down from his position after four years at the Pentagon Dec. 4, including the past two years in his current role.

He led the Pentagon’s most recent Strategic Choices and Management Review and worked to lead the military through budget uncertainties, Secretary Chuck Hagel said Thursday.

“I have continually relied upon Ash to help solve the toughest challenges facing the Department of Defense,” Hagel said.

“I am thankful that Ash will continue to be at my side for the next two months, helping the Department of Defense manage through a very disruptive and difficult time, and ensuring a smooth transition within the office of the Deputy Secretary.”

He also served as assistant defense secretary for international security policy during the Clinton Administration.

Carter is a four-time recipient of the Department of Defense Distinguished Service Medal and has been awarded the Defense Intelligence Medal.