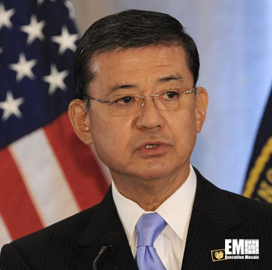 The Veterans Benefits Administration could furlough more than 10,000 employees if it runs out of money from its mandatory spending accounts, Federal News Radio reported Thursday.

Jared Serbu writes these furloughs would come on top of the agency already having to send 7,800 workers home because of the government shutdown.

“At that point, these 13,000 or so people who are doing this will have no reason to continue to function because the necessary implication clause that allows them to work will be exceeded when the mandatory account is exhausted,” Veterans Affairs Secretary Eric Shinseki said to the House Veterans Affairs Committee Wednesday, according to the report.

“And at that point, they will be furloughed, and our Veterans Benefits Administration will be reduced to maybe less than 1,500 folks,” Shinseki added.

Many benefits and support functions at the VA continued in the shutdown’s first week because the department can carry over certain amounts of unspent funds from the previous to the current fiscal year, Serbu reports.