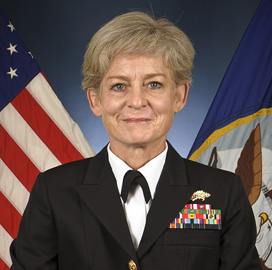 Rear Adm. Katherine Gregory has been commander of the Naval Facilities Engineering Command and chief of civil engineers since Oct. 26, 2012.

She was most recently the commander of Naval Facilities Engineering Command Pacific and the Pacific Fleet civil engineer.

Gregory was the First Naval Construction Division’s chief of staff and had been deployed to the Western Pacific, Mediterranean, Iraq and Haiti during her Seabee tours.

She also toured in Japan, Italy, San Francisco, Alaska and Pearl Harbor and conducted staff tours in Washington as action officer of Seabee and Chief of Naval Operations Overseas Bases.

A 1982 graduate of the U.S. Naval Academy, Gregory is a registered professional engineer in the Commonwealth of Virginia, a qualified military parachutist and a Seabee combat warfare officer.

She earned graduate degrees from the University of Southern California and George Washington University and attended the Senior Executive Program at the London School of Business.