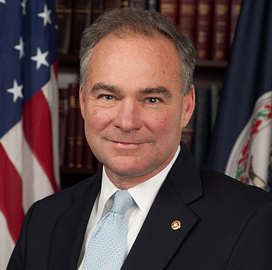 Sen. Tim Kaine has expressed hope the U.S. military could keep $20 billion of its budget if a new proposal from the House and Senate budget committees passes into law, Breaking Defense reported Tuesday.

Sydney Freedberg Jr. writes Kaine, member of both the armed services and budget conference committees, told members of the U.S. Navy and Marine Corps at a Washington conference the budget plan brings stability to the military over the next two years.

“We’re shooting for a deal that would provide two years of certainty – a budget for the remainder and appropriations bills for the remainder, of FY ’14 and also for FY ’15,” Kaine told the conference.

Ret. Marine Lt. Col. Frank Hoffman also suggested a grassroots network be established in order to spread the contractor base across the country, Freedberg writes.

Representative Randy Forbes said that cuts in the military budget and intermittently changing the budget has a profound impact on military readiness, modernization and R&D.

“It is amazing that how many of them in leadership believe this is like a faucet, you turn it on and you turn it off,” Forbes said.

“We have pleaded, literally pleaded to get the leadership on both sides of the aisle, Republican and Democrat, just get the classified briefing on what’s happening to the military now because of sequestration and cuts,” he added.