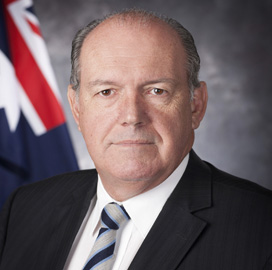 Sen. David Johnston, the new defense minister of Australia, wants to complete a fresh set of policies governing the relationship between the nation’s defense department and industry, Defense News reports.

Nigel Pittaway writes Johnston has vowed to issue a white paper and a defense capability plan within 18 months after the coalition government assumed office in September.

Johnston told the publication the white paper is intended to help establish better relations between the industry and Australia’s Defense Department.

The defense minister plans to change how the Defense Materiel Organisation meets deadlines for contracting process, according to the report.

“For a long time we’ve been very concerned about the way DMO relates to industry; tender documents that have to be brought into the room in a wheelbarrow concern me greatly as being less than commercially viable,” Johnston told Defense News.

“One of my principal concerns in the administration of the portfolio is timeliness,” he adds.

Johnston also said the Australian government intends to bring the country’s defense spending level to 2 percent of its GDP over the next decade, Defense News reports.