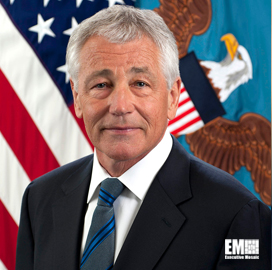 Nick Simone writes Defense Secretary Chuck Hagel offered a preview of the defense budget request for the next fiscal year at a news conference held Monday at the Pentagon.

Hagel told reporters the Pentagon faces a $75 billion cut over the next two years and that number could grow if sequestration occurs in fiscal year 2016.

“If the force is smaller, there’s less margin for error,” Hagel told reporters.

“While it is true that reserve units are less expensive when they are not mobilized, our analysis shows that a reserve unit is roughly the same cost as an active duty unit when mobilized and deployed,” he added, according to the report.

AFPS reports the department seeks to add up to 4,000 personnel to the military’s special operations group.

The spending plan also calls for the Air Force to replace its legacy A-10 fleet with the F-35 joint strike fighter aircraft program, a move that could save the branch as much as $3.5 billion, Simone writes.

AFPS reports Joint Chiefs of Staff Chairman Gen. Martin Dempsey said the proposal “reflects in real terms how we’re reducing our cost and making sure the force is in the right balance.”

Hagel and Dempsey are scheduled to testify next week before lawmakers on the Pentagon’s 2015 budget request, according to the article.