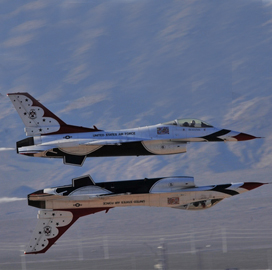 The Eurofighter industry consortium and a group of four countries are discussing the future of the Typhoon Tranche 3 fighter jet, Defense News reported Sunday.

Andrew Chuter writes that Typhoon manufacturers have set a mid-2014 deadline for the U.K., Spain, Italy and Germany to decide on the aircraft’s final production run.

The Eurofighter consortium is comprised of BAE Systems, Airbus Defense & Space and Finmeccanica.

According to Chuter’s report, the four-country fighter jet program was divided into two portions as part of a 2009 agreement among the stakeholders.

The four countries have pledged a total of 112 Tranche 3A orders and committed to split 124 Tranche 3B aircraft, according to the report.

Chuter writes the Eurofighter industry consortium has received an additional order from Saudi Arabia and is in talks for a potential deal with Bahrain.

The alliance is also offering the aircraft to Qatar and Kuwait and intends to submit an aircraft leasing proposal to Malaysia, according to the report.