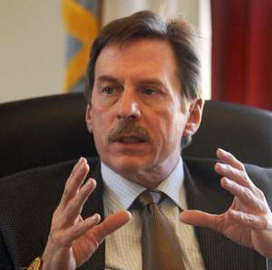 Bernie Mazer, the Interior Department‘s chief information officer, is set to retire in July and has already started the transition process to prepare for the selection of the new CIO, Federal News Radio reported Friday.

Jason Miller writes Sylvia Burns, acting associate deputy CIO for service planning and management, will be acting CIO in the interim as Mazer ends his 25 years of government service.

“Bernie has been an instrumental part of the Department of the Interior for almost four years, leading OCIO into one of the most innovative IT departments in the federal government,” Andrew Jackson, DOI’s outgoing deputy assistant secretary for technology, information and business services, said in an email to staff.

Mazer has led the consolidation of the department’s information technology infrastructure, including email systems and data centers, following a roadmap issued in 2011 targeting $500 million in cost savings from 2016 to 2020.

He was co-chairman of the Portfolio Management Committee and head of the Federal Data Center Consolidation Initiative at the CIO Council.

Prior to joining DOI, Mazer worked on information management and telecommunications for the U.S., Europe and Southwest Asia regions for the Defense Department.