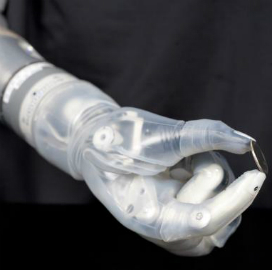 The U.S. Food and Drug Administration has allowed the sale of a robotic arm that DEKA Research and Development Corp. designed to help amputees do multiple, simultaneous movements for complex tasks, Reuters reported Friday.

Will Dunham writes the company developed the DEKA Arm System as part of a $100 million prosthetics project run by the Defense Advanced Research Projects Agency, which provided more than $40 million to DEKA for the robotic arm.

A Department of Veterans Affairs study indicated 90 percent of users could make complex movements with the arm, Dunham reports.

“The DEKA Arm System may allow some people to perform more complex tasks than they can with current prostheses in a way that more closely resembles the natural motion of the arm,” Christy Foreman, director of the device evaluation office at the FDA’s Center for Devices and Radiological Health, said to Reuters.

Dunham reports that the technology uses electromyogram electrodes to send signals from muscle movement to a computer processor in the arm.

Paul Brubaker on VA’s Efforts to Accelerate IT Modernization