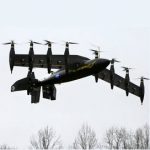 NASA engineers from the Langley Research Center have completed the flight test of a 10-engine, battery-powered prototype aircraft called Greased Lightning, which the agency plans to eventually develop into a personal air vehicle.

The remotely piloted GL-10 prototype has transitioned from vertical or hover-mode flight to forward “wing-borne” flight through a series of flight tests, Langley’s Kathy Barnstorff writes May 1.

“Now we’re working on our second goal — to demonstrate that this concept is four times more aerodynamically efficient in cruise than a helicopter,” said Bill Fredericks, an aerospace engineer at Langley.

He said the original concept for the GL-10 is as an unmanned aerial vehicle or an aircraft for small package delivery, surveillance and mapping.

According to Barnstorff, the aircraft is in the design and testing phase and currently has a 10-foot wingspan and weighs as much as 62 pounds at takeoff.

The program will move next to aerodynamic efficiency tests, Barnstorff said.