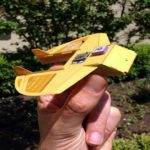 Scientists at the Naval Research Laboratory have developed a palm-sized drone, dubbed the Cicada, that can be dropped from a plane to perform military missions in a remote area.

The Covert Autonomous Disposable Aircraft has no engine and can fly silently to programmed coordinates at 74 kilometers per hour, the Agence France-Presse reported Saturday.

“The idea was why can’t we make UAVs (unmanned aerial vehicles) that have the same sort of profile,” said Aaron Kahn, a flight controls engineer at the Naval Research Laboratory.

“We will put so many out there, it will be impossible for the enemy to pick them all up.”

Daniel Edwards, an aerospace engineer at the naval lab, said the microplanes could be equipped with sensors and microphones to carry out surveillance missions behind enemy lines.

The miniature drone could also help meteorologists to forecast tornadoes because of its capacity to measure temperature, humidity and air pressure, according to the AFP report.

The miniature planes are on exhibit at the Defense Department’s Lab Day as part of the agency’s efforts to showcase advancements in military technology.