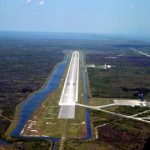 The space agency said Tuesday the agreement calls for Space Florida to explore new commercial opportunities for the facility.

“Following the final space shuttle landing in 2011, the site has transformed into a multi-user facility supporting a variety of commercial and government partners,” said Bob Cabana, director of Kennedy Space Center.

“We look forward to partnering with Space Florida to expand upon the multi-use of this historical asset.”

The 15,000-foot-long runway was constructed in 1974 to accommodate the returning space shuttles to the center and has supported flights of various types of aircraft since 1976, according to NASA.