A future facility at the Air Force Academy in Colorado Springs will seek to give soldiers an environment for collaborations with industry and academia in the field of cybersecurity, the service branch’s top civilian leader has told ExecutiveGov.

Deborah Lee James, Air Force secretary, said the service branch aims to have that center stood up within the next year and other federal agencies will also be able to collaborate at the facility when it opens.

“We very much want to leverage the creativity and the innovation coming out of the private sector,” James said to ExecutiveGov.

“So much of Air Force’s work depends on innovation, research and development, much of which take place in the private sector.”

ExecutiveGov spoke to James ahead of her keynote address July 22 at the “2015 Air Force Forum” hosted by the Potomac Officers Club — which is owned by the parent company of this website.

James also offered her perspective on the Air Force’s combat readiness, which she cited as the current issue that concerns her most regarding the branch’s current status. 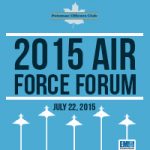 She said branch commanders estimate half of the branch’s combat forces are not sufficiently ready for conflicts in the air, space or cyber space where “the enemy can shoot you down or can interfere with you in some significant way.”

“That is always a major topic of discussion as we discuss the needs of the future and our budgets,” James said.